Anti-Judaism and the Kol Nidre myth

A recurring theme on this blog will be anti-Judaism, a form of anti-Semitism that focuses on the immorality that is allegedly inherent in the Jewish religion. Proponents of anti-Judaism claim that Judaism is a debased and depraved religion; that its holy books – especially the Talmud — are filled with absurdities and blasphemies; that its laws encourage or even require Jews to scorn and hate non-Jews and to engage in activities to damage and undermine non-Jews and their societies. In this respect, Anti-Judaism should be distinguished from other forms of anti-Semitism, which attribute alleged Jewish malevolence to racial characteristics or to deviant socio-cultural norms in Jewish societies.

One of the staple accusations of anti-Judaism is particularly relevant now, in this season of Judaism’s High Holy Days. I am referring to the Kol Nidre myth, which alleges that Jews conduct a ritual by which they cynically and maliciously absolve themselves from keeping their promises. 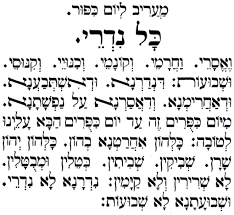 Kol Nidre is the name of a prayer uttered in synagogues on Yom Kippur, known in English as the Day of Atonement.  Yom Kippur is a day of fasting and repentance, in which many Jews spend virtually the entire day in synagogues, reciting prayers, reflecting on their shortcomings and sins of the previous year, and making resolutions to become better people and better Jews in the year to come.  The day is physically and emotionally exhausting, but many Jews, myself included, love the melodies of the chanted prayers, the camaraderie of being surrounded in the synagogue by family and friends, and the emotional catharsis we feel when the stars come out at the end of the day and we turn to face the new year, refreshed.

Anti-Semites turn Yom Kippur into a hideous caricature of itself. They cast Yom Kippur not as a day of repentance and renewal, but as a day on which Jews ritually absolve themselves of their past sins so that they can go ahead and commit more sins with a clean slate.  In the words of one poster on the white supremacist Stormfront website:

“Yom Kippur is supposed to be the ‘Day of Atonement’ when all the Jews somberly ask their god to forgive them for all the wrongs they did in the preceding year….Of course we all know how it ends.  ‘God forgiffs us and den ve’re off for anudder year of lying and cheating and stealing from de goy…vot a vonderful god ve haf’ …. [T]heir god takes their sins they have spent all day atoning for and forgives them so they can embark on the next year of foul corruption and self aggrandisement.”

This is an example of anti-Judaism, where anti-Semites allege that the Jewish religion encourages Jews to behave in an immoral way.

Anti-Semites particularly obsess over Kol Nidre, the opening ritual/prayer at the start of Yom Kippur.  The words “Kol Nidre” are Aramaic (the language spoken by many ancient Jews, including Jesus, and which many Americans have heard spoken in Mel Gibson’s Passion of the Christ), and mean “All Vows” in English. It is a relatively short ritual chant, in which the congregants address the issue of religious oaths that they may take in good faith, but which they may not live up to.

Judaism takes religious oaths — in which a Jew swears to perform an act of devotion to God — very seriously.  In ancient times, religious oaths usually related to the offering of sacrifices in the Temple in Jerusalem; a Jew who was considering pledging a sacrifice to the Temple would take an oath once he made up his mind, thereby imposing a solemn obligation on himself to follow through.  Religious oaths could also be made by a Jew who wished to obligate himself to say extra prayers, or to perform some other extra-curricular ritual obligation.  In ancient Judaism, if a Jew took a formal religious oath and then did not follow through on his commitment, he was considered to have committed an offense against God, and he faced possible punishment from a religious court.  So religious oaths were quite serious, and many people avoid taking such oaths altogether.  They could still say the extra prayers, for example, but they avoided taking a solemn vow to say the prayers.

Because of the seriousness with which Judaism approaches the subject of religious oaths, the Kol Nidre prayer is designed to short-circuit the oath-taking process. By saying the prayer, a Jew states that he or she doesn’t intend to imbue any devotional commitment he or she may be moved to make — even a commitment phrased in the form of a promise — with the status of a religious oath.  It’s still a commitment, of course, and the Jewish person is morally obligated to try to live up to it.  But by saying the Kol Nidre prayer, the Jewish person makes clear that he or she intends all such commitments to not be invested with the serious weight of a formal religious oath.  This prayer is particularly relevant on Yom Kippur, the day devoted to self-reflection and resolution-taking for the year to come.

Just to be perfectly clear: Kol Nidre has absolutely nothing to do with promises or oaths that Jews may make to each other, or to non-Jews. When a Jewish person swears an oath or makes a promise in a court, or in the course of business, or in an interaction with someone else, Judaism does not provide any sort of legal fiction to allow that person to wriggle out of it. Many Jewish prayerbooks explain this in their introductions or commentaries to Kol Nidre.

Anti-Semites, however, twist and distort the meaning of the Kol Nidre prayer — just as they do the character of Yom Kippur as a whole.  Anti-Semites allege that Kol Nidre provides moral “cover” for Jews to break their word, not just in promises made to God but in promises and commitments made to other people.  Henry Ford, a famous American anti-Semite [who also happens to have had something to do with cars 😉 ], wrote in The International Jew that Kol Nidre is a prayer that “excuses perjury” and renders worthless the testimony of any Jew who uttered it. Ford goes on to say:

“[T]he Kol Nidre prayer is a holy advance notice, given in the secrecy of the synagogue, that no promise whatsoever shall be binding….The prayer breaks down the common ground of confidence between men….It requires no argument to show that if this prayer be really the rule of faith and conduct for the Jew who utters it, the ordinary social and business relations are impossible to maintain with him.”

Ford wasn’t the first anti-Semite to make this claim about Kol Nidre, and he certainly has not been the last. Ford’s exact text is reproduced on the website of Holocaust denier David Irving, and many others attack Kol Nidre in their own words.  Ted Pike, an anti-Semite whose Oregon-based organization is called the “National Prayer Network,” describes Kol Nidre as “Judaism’s license to lie” in an essay by the same name.  He also says:

“Can any person or people with this kind of mentality be trusted? It’s this kind of mindset that gives cause for normal decent people to hate jews down through the centuries….A Christian’s word is expected to be as good as his bond; however a jew makes provision to drop below that level of morality. In fact, within the framework of the Zionist influenced U.S. government, there is a foreign and domestic policy to dishonor any agreement when it becomes disadvantageous to jews. This has been typified in broken treaties as the Kol Nidre mentality anticipates a futuristic perspective of deliberate deceptions….”

There are many, many more examples of anti-Semitic attacks on Kol Nidre, both in books and online.

4 Responses to Anti-Judaism and the Kol Nidre myth